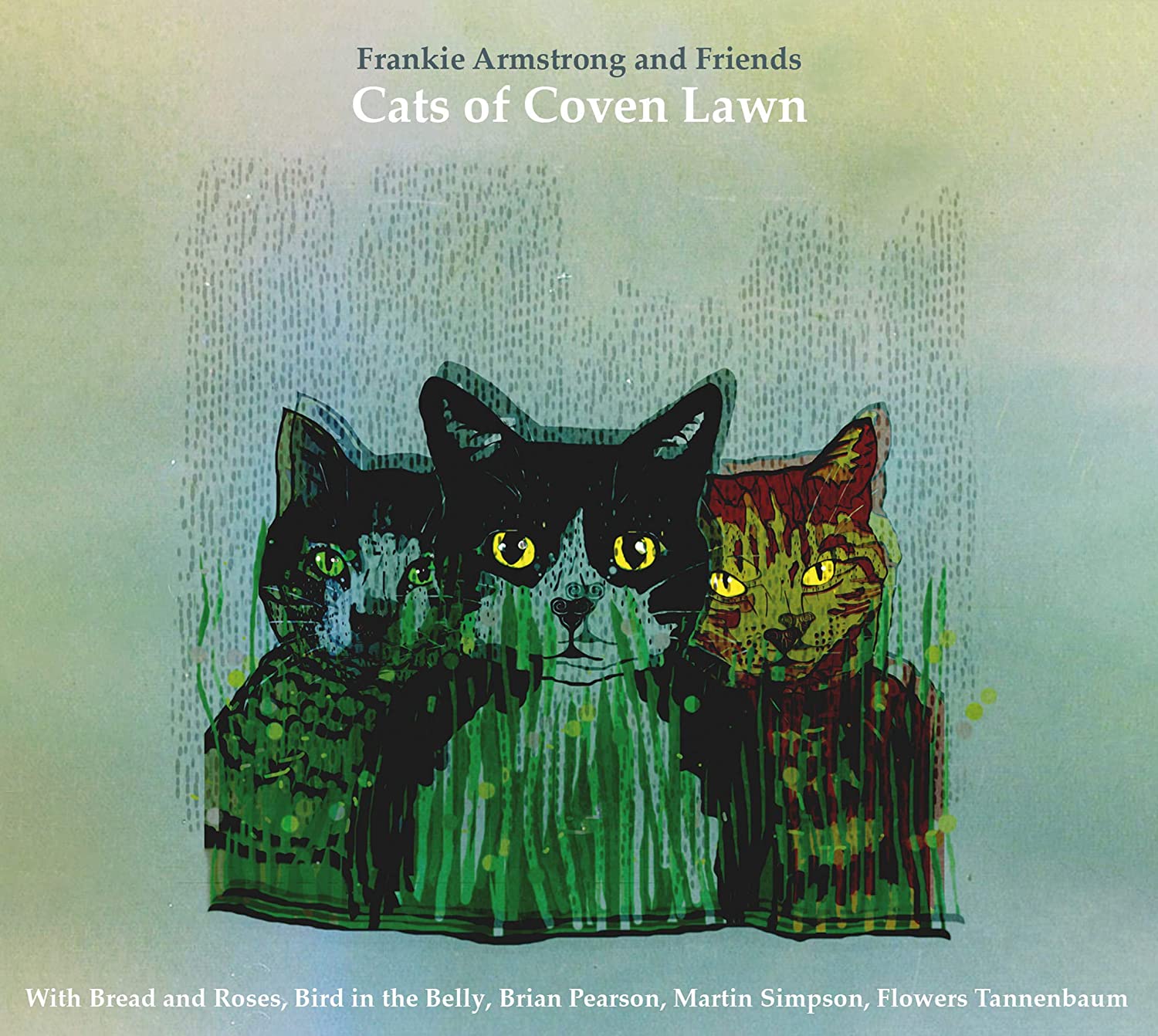 Singer, voice teacher and doyen of the folk scene and the women’s movement Frankie Armstrong turned 80 earlier this month -a little over two years after receiving the coveted EFDSS Gold Badge Award. Cause for celebration, then – and here it comes in the form of a wonderful new album, the impetus (instigation) for the recording of which came from her Green Ribbons colleague Ben Webb (aka Jinnwoo of Bird In The Belly). Here, Frankie has surrounded herself with singing (and playing) friends; the overall feel of the album is therefore very much one of intimate, convivial companionship (and mutual esteem), the aesthetic being that of a bunch of like-minded comrades getting together in the living room to share songs and relive communal memories. Which means that, as in any such gathering, the host is likely to inspire rather than dominate the conversation: thus a fellow-singer will occasionally take the lead on a song, whereas several of the album’s songs are performed by Frankie in consort with her Bread & Roses trio colleagues Pauline Down and Laura Bradshaw.

As is her wont and practice, then, Frankie refuses to grandstand or make her own singing the focus, although her legendary commanding, steadfast vocal presence provides an abundance of thrilling moments over the course of the album. Notably a typically authoritative condensed collation of the ballad Lizzie Wan (for which Martin Simpson supplies a deft, lyrical and perfectly supportive guitar foil) – for no record of Frankie’s would ever be complete without a traditional ballad – and a moving account of the traditional Willow Song, familiar from its adoption as Desdemona’s lament in Shakespeare’s Othello.

But the remainder of the disc’s carefully chosen tracklist is significantly daring even by Frankie’s own eclectic standards. Inevitably there’s a healthy contingent of socio-political material; and where better to start than with a committed, raw a cappella-trio account of Bread And Roses, the oft-recorded James Openheim poem which is here given in the less-oft-heard Leon Rosselson setting. Frankie’s own composition Where I Live On The Map compellingly addresses the issue of water deprivation, while We Are Women revives Frankie’s stirring 1980s setting of key words by Susan Griffin; Story Of Strength which, with telling economy of expression, tells the empowering story of campaigner against oppression Malala Yousafzai.

Other crucial themes explored in this collection include solidarity in the joy of singing (the Rosie Waite original Something Sings, a Serbian dance-song and a yoik from the Sámi people of northern Scandinavia). And Ben Webb’s eerie invocation of Marcy’s Guesthouse is both a fine showcase for Frankie’s vocal artistry and a standout track. Frankie’s friend Brian Pearson contributes three contrasting songs including a celebration of the yearly cycle (Four Seasons) and a deliciously “Brianic” take on mortality (Dead Funny). The album’s title number is an affectionately fun, homespun little feline-focused ditty adapted by Ben from a broadside ballad, set to a simple guitar strum and sporting a naïvely charming miaow interlude. Fittingly, the disc closes with Lindsey Williams’ touchingly sanguine valedictory reflection on A Life Lived Well.

I’m so glad that Frankie was persuaded to record this album, albeit by means of the “carrot” of being able to involve a circle of friends, for their contributions lovingly impart this ostensibly disparate collection of material with a tangible sense of fellowship, togetherness and unity entirely befitting Frankie’s lifelong vocation as enabler. At the same time, Frankie’s own staunchly life-affirming presence, her total conviction in artistic expression in the face of adversity, rides aloft on the power of music and song.