“The godmother of the natural voice singing movement” GP 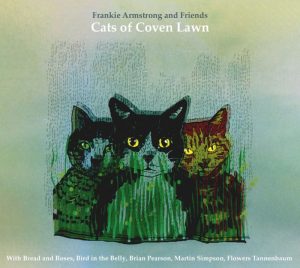 Hello to anyone taking a look at this website in this strangest of strange times. I hope that wherever you are and whatever your situation you are keeping as safe and well as possible, and you, like me, are looking forward to a greener normality returning.  I’ve loved learning how so many of you who use voice and singing are finding different ways to keep in touch and sing together proving the power of voice will not be silenced.

I have produced a new album during lockdown. Please go to my sales page for more details, but suffice to say I am immensely proud of this work and all my collaborating artists who were so great to work with.

“…Frankie Armstrong, one of the most compelling and beautiful of the folk voices of Britain. Her singing of her own song Out of the Darkness had a power and intensity approaching the vision of Blake himself. A superb example of the fusion of art and committment.”

Writing about Frankie as song writer in a review of a concert for Nuclear Disarmament with John Williams and Paco Pena.

I’ve been singing professionally since 1964 and from1975 developed and taught a variety of voice and singing workshops. My journey with the voice began with the skiffle boom in 1957, moving through the British folk song revival of the early 1960s, and having the good fortune to study, perform and record with leading figures of the folk revival such as Louis Killen, Ewan MacColl and Bert Lloyd. With Peggy Seeger and Sandra Kerr, I researched and developed The Female Frolic (1966) for live performance and a recording, which began my particular interest in women’s lives as illuminated through song. Since 1962, I’ve built up a repertoire of British songs and ballads, which, along with contemporary British songs, still form the basis of my musical vocabulary. I find the song form extraordinary, despite its brevity, as a way of expressing the widest and deepest range of human emotions.
I have made 12 solo albums as well as featuring on numerous shared and themed recordings, contributed chapters to 11 books, written an autobiography and co-edited Well Tuned Women (on women and voice) with Jenny Pearson.

Her voice conveys utter conviction and great humanity. She is an incredible story teller and has me on the edge of my chair listening to Tam Lin even though I’ve heard it dozens of times.

See all the events...